We seldom notice how our ability to separate, divide or segment things interferes with the ability to see facts as they are: simple, and that are presented to our senses directly. Here I will raise this question in relation to a probability game.

There is an interesting statistical problem that deals with contingencies, where intuitively it seems that one thing is true but the opposite is the case. I consider the topic relevant because our propensity to think of multiple possibilities based on separation and segmentation, on the elaborate intellect trying to see something difficult in the simple, can deviate us from the simple and correct solutions. To see an example of it, with the suggested solution, you can enter the following link.

What is the matter here? Well we have 3 doors, two of which contain a goat and a third that has the prize: a car. We have the opportunity to select a door at the beginning. After this, the person in charge of the test, or the presenter of the program, opens one of the remaining doors showing one of the goats, at that moment it gives us the option of staying with the door we have chosen or changing it to the remaining door. According to the proposals regarding the solution of the problem, the correct strategy is always to change the door and not keep the one we had selected. Why is this? Well, the odds would be against us otherwise. Let’s consider: 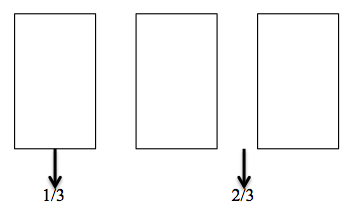 Now, let’s see what happens when we think of other possibilities. It could be considered that there is a cognitive bias in the matter, and this refers to the group of doors that we assign the remaining probability. Keep in mind that any combination of two doors, including or not the one that was selected at the beginning, would contain 2/3 of the probability of containing the car: 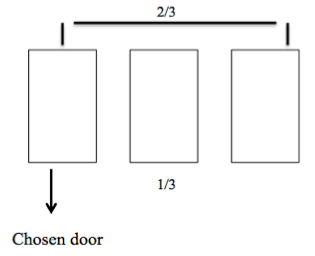 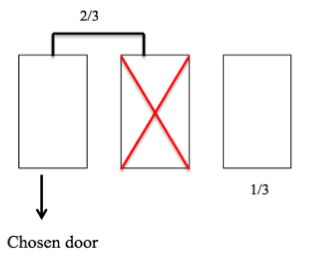 So, consider that the 2/3 probability of finding the car behind one of the doors two or three (the middle and the third to the right) would seem in principle a bias or error in our reasoning, taking into account that any combination of two doors would contain 2/3 probability.

Now consider this taking into account that the rules are maintained and the subject chooses the first door. The subject who chooses the first door may be thinking that either the first or the second contains the car, between them there is 2/3 probabilities, and the third one remaining contains the one third. So when the presenter eliminates the option of the middle, the subject would say that there would be more probability that the car is in the first chosen door, since the first and the second contained 2/3, in which case the optimal strategy would be stay with the chosen door, under that perspective and that line of thought. Now, if the subject was with the idea that both the first and the last door contain 2/3, by eliminating the option of the meddle, which was the remaining third, the subject has still uncertainty, as the first plus the last option contains 2/3 of the probability of containing the car, under such a perspective. But if we add the first perspective of the 2/3 in the first and second door, here we could also say that the strategy is to maintain the choice. We must take into account the fact that the presenter has knowledge of which is the door that contains the car, and that when he eliminates one of the options, he can only do so with respect to a door that contains a goat and not the prize of the car, but under the previous perspectives the strategies seem to change, it is true that taking into account that the 2/3 are in the second and third door the strategy would be to change, but not under the previous perspectives as a whole, so in the face of the same situation we would have contradictory strategies depending on the point of view we adopt. In itself we have a strategy that tells us to keep the election, another to change it, and a third of uncertainty that according to which position we adopt, we can take the strategy of maintaining or changing.

The same would happen if the person chooses door two or three. Consider that in the previous case the door you chose, the first one, was the one that contained the car. Now consider that the first door is still the one that contains the car, but the subject chooses door two, even though door one and two represent 2/3. In that case if the presenter eliminates door 3 (which is the only one that can eliminate), then the person remains in the same position of uncertainty mentioned above, but adding the other perspective, that the 2/3 represent the door 2 and 3, then when the presenter eliminates the door 3, then the strategy would be to keep the election, and again under the consideration that the 2/3 are the door 1 and 3, then the subject should change, we have again contradictory strategies according to what 2/3 we consider, but both would be feasible according to the intellect, when we carry out the work of segmenting and dividing.

Under the above, one could conclude that any strategy is valid. But if we consider the third possibility, to choose the third door when the first one contains the car, although the contradictory strategies arise again, we can see a pattern when taking into account the previous possibilities. In the first case, the strategy was to stay in order to get the car, in the second to change to get the car, and in the third case he also get the car if we change. So 2 out of 3 times the car is obtained if one changes its initial choice, even considering that any 2/3 of combinations of doors is valid and throws us contradictory or uncertain strategies. These speculations leave aside the simple fact that when one chooses at the beginning, one has only 1/3 of possibilities of choosing the car, the rest are conjectures and thoughts, that is the basic fact, so changing will always have more chances of success because the remaining option contains a car 2 out of 3 times.

In general, many times we fool ourselves into our own thoughts, divide, classify, segment things, and this plays against the observation of concrete, simple facts. In fact many people continue to argue other possibilities regarding this problem, obviating this simple fact. And it happens in many areas of people’s work, perhaps the conclusion of all this is to observe the facts, and consider the simplicity of things, where usually the truth and solutions are.

In the following link you can perform a simulation of the problem and see the different probabilities.

View all posts by sinapticas